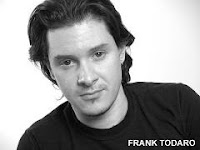 Your pal Zuben aka Phil Ristaino, Agent of Venus here.  Glad to see you back.  This is a quick post.  Over the past month, month 1/2, I've been interviewed twice on the magnificent The Invisible World with Frank Todaro.  Frank is an actor who lives in NYC with a great voice for radio, as well as a fellow sci fi promulgator and comic book buff.  Up until mid last year, we performed together in the NYC long form episodic improv group Start Trekkin NY.  Frank became a great friend, and we would have long conversations about paranormal phenomena and fictional fascination.  Fortunately, Frank is channeling his love for BSG, Dr Who and the X Men into a weekly online radio show.  It gets better and better every week, so get on over there and download his shows!  You can hear new ones at his show's site every Tuesday night.

In the mean time, Frank was kind enough to feature two Agents of Venus tunes on the show:  Hero with 1000 Eyes in the first interview, and Cobalt Silver on the second.  Hopefully this trend will continue and we will play the entire album over the course of 12 interviews, if Frank says its cool.  Thanks, Agent Todaro!

Also featured in the interviews:  my take on synchronicity, stories of phenomena I've experienced that I can't truly explain, visions, 2012, precognitive dreams, and lots more.  Dig it and dig in!

Posted by agentsofvenus@gmail.com at 12:39 PM